When Sidhant Sharma first started along his path in aviation, he never imagined he would earn the title of being an aircraft maintenance engineer (AME) at Air Canada, and possibly even the world’s youngest Boeing 787 engineer. Sharma has been around aviation his whole life — from being in Air Cadets from a young age, to his father being a loadmaster for Japan Airlines, and his brother becoming an Airbus A320 first officer — but he was especially drawn to the often-overshadowed maintenance side of the industry.

“I did find the technical aspect of [aviation] pretty interesting,” said Sharma, “because you have to take such a methodical approach in order to resolve an issue within an airplane. It’s just the kind of person that I am, as well.” 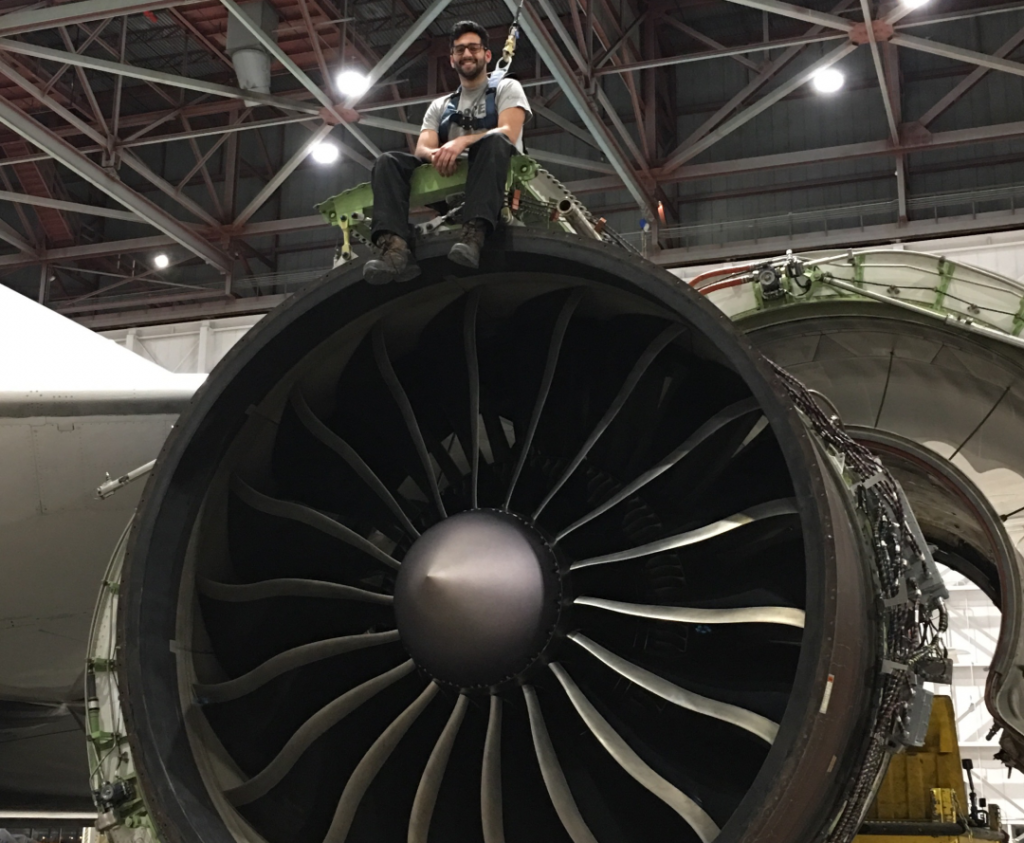 Sharma is a maintenance AME, which means he’s able to do troubleshooting and repairs on the full scope of an aircraft. Sid Sharma Photo

While he didn’t have a lot of “hands-on experience” prior to attending the British Columbia Institute of Technology (BCIT) on a scholarship, Sharma took a full-time job working the ramp at Pacific Coastal Airlines during his first few years of school.

His biggest learning curve began when he graduated from his maintenance program in 2014, and made the leap from the ramp to maintenance at Pacific Coastal.

“It was a matter of simply putting my head down, working hard, listening to others, learning from my mistakes, and being modest,” said Sharma, “just to help me get through my apprenticeship.

“My apprenticeship was very interesting because that’s where I realized every job is an important job — there’s no such thing as a small or insignificant task,” he added. “Jobs like greasing landing gear or flight controls . . . they weren’t always jobs that would help me complete my logbook, but all the jobs would ultimately help build my character.”

His work ethic, collection of knowledge, and positive outlook — all of which are inspiring — helped him become an AME at Pacific Coastal, and soon after, in 2017, land a job as an AME at Air Canada. Though the Canadian flag carrier was only accepting new hires in Toronto, Ont., Sharma didn’t hesitate to travel across the country for the exciting opportunity.

“Being out in Toronto by myself… it did kind of test my ability to adapt to a new environment without having a support system,” he said.

Sharma was making impressive career strides at such a young age. “I actually joined the airline a day after my birthday, I just turned 23.”

And another achievement followed one year later. In 2018, Sharma completed an endorsement course on the Boeing 787 — which was a relatively new plane at the time. At 24 years old, Sharma believes he might have at one point been the youngest 787 engineer in the world.

“Only Boeing was doing the endorsement courses [at the time], there were no thirdparty courses,” explained Sharma. “So the same instructors would go around the world to all the different airlines to do these 787 courses. One of the instructors told me, during sim training, that I was actually the youngest person they’d taught thus far. He basically said, ‘…making you the youngest 787 engineer in the world.’ It’s not written in stone or anything, but it was a pretty cool thing to hear.”

Reflecting on that moment, Sharma said he felt rewarded for his persistence. Not to mention, it was a true “full circle moment” for him from where he started. 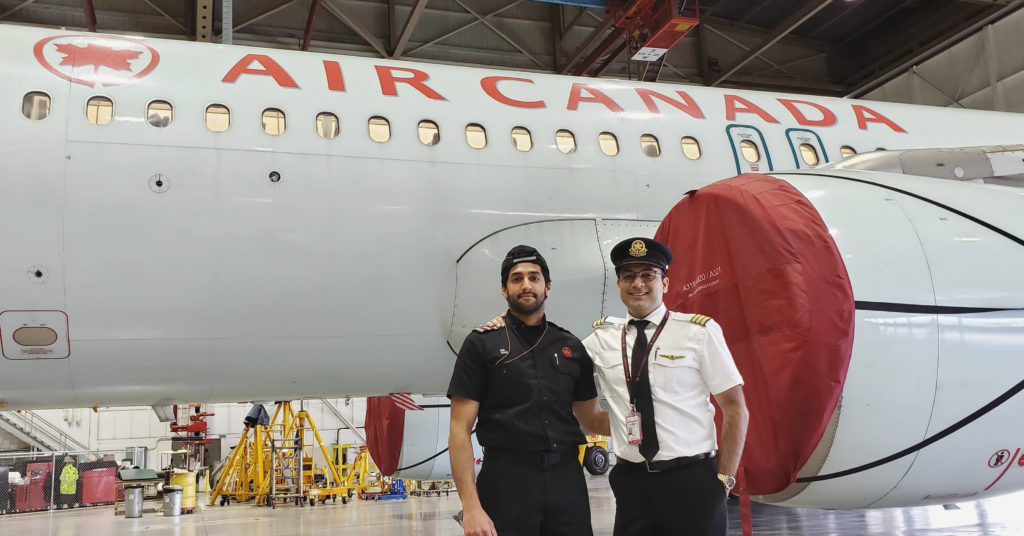 Later in his career at Air Canada, Sharma worked his way up to relief team leader for the Vancouver base, which provided him the opportunity to learn the operations behind the maintenance department. “It was a great experience because I was able to see the bigger picture, and how all the different departments (operations control, planning, ground operations, [and] flight operations) come together to achieve the common goal of getting the aircraft ready for departure,” he said.

Since the COVID-19 pandemic hit, Sharma has been laid off from Air Canada.

But that hasn’t stopped him from pushing himself to further his career as an AME. “I feel very blessed because I did get a lot out of [Air Canada] in terms of growth and advancing my career.”

Now, he’s paving his own path as the founder of AOG Solutions Inc., which has allowed him to do contract AME work for companies in the Vancouver, B.C., area.

“One thing about being an AME that people don’t think about is you have the ability to contract,” said Sharma. “So AOG Solutions is an incorporated company that I set up, and it allows me to work for other AMOs.

“You get to utilize your transferable skills and apply the sum of your knowledge to the work. . . . It’s just a matter of constantly pushing myself to build knowledge, and not getting too comfortable. Being able to learn and adapt to these different environments is really what helps me become more well-rounded.”

Sharma stressed that the work of an AME is much more diverse than many might think. “The greatest misconception about AMEs is that we just change tires,” he laughed. “But there are three categories of AMEs. There’s avionics, structural, and maintenance.”

Sharma is a maintenance AME, which means he’s able to do troubleshooting and repairs on the full scope of an aircraft. For example, “If the windshield gets damaged from a bird strike, you’re replacing the windshield. Or if one of the engines is lagging and the other one is too quick to react, then you’re adjusting the controls of the engines.”

While the maintenance side of aviation is often overshadowed by the pilot/crew side, Sharma said he encourages young people who are interested in aviation to take the AME path. “It does take a special level of diligence and attention to detail to be an AME,” he said, “but it’s extremely rewarding.

“And a lot of smaller operators are still hiring, like flight schools and other companies in general aviation,” he added. “I’d highly recommend that because you get to build a lot more diverse skills and develop a strong foundation starting out with the smaller companies, like I did.”

His advice for current or aspiring AMEs comes from a quote he heard growing up that has stuck with him: “Don’t chase success, chase excellence and success will follow.”

“I did that,” he said. And there’s no limit to what he’ll achieve next.

On 26 May, Vision Concept Aviation Training Institute took part in a Women in Aviation 2021 event. An exclusive awards...

ABOUT This EASA Part-147 approved training course is designed to provide the attendee with theoretical knowledge of Airbus A318/A319/A320/A321 (CFM56) and...

Boeing NG B1.1 and B2 Theoretical Elements

ABOUT The training course is designed to provide the attendees with understanding of the revised structure of Regulation (EU) 1321/2014 with...

ABOUT The course is designed to provide its attendees with a thorough understanding of the Aircraft Maintenance Engineering activities. The content...

ABOUT This EASA Part-147 approved training course is designed to provide the attendee with theoretical knowledge of Airbus A318/A319/A320/A321 (CFM56) and...

Various prominent news agencies covered the press conference organized at our institute at the launch of our new aviation and...

Guest speakers have become an important part of the educational experience. For the VCATI students, the speakers will serve as great role...

GLOBAL INVESTMENT IN AVIATION SUMMIT 2020 gathered professionals and senior leadership from airlines, airports and aviation authorities. The Summit was...

Industry visit to UAS International Trip Support. The event was exclusively for students of VCATI to bridge the gap between industry...

Is windowless the future for passenger aircraft design?

According to many of the world’s leading airlines, aircraft engineers, and designers, the aircraft of the future will have no...

One of the most prevalent challenges in the airline industry is the need to reduce costs and delays, while maintaining...

The alphabet of aircraft maintenance: how do airlines ensure jet safety?

Some commercial aircraft have spent more than 45-years in active service. But to assure passenger safety, airlines across the globe...

IATA\’s forecast for recovery in global air travel by 2023 is \’about the right timeframe\’: Scoot CEO

IATA's forecast for recovery in global air travel by 2023 is 'about the right timeframe': Scoot CEO SINGAPORE: The International Air Transport...

Best And Worst Airlines In 2017

The best airlines list is one of the most anticipated lists of the aviation industry and all the related ones....

As the field of Aircraft Maintenance Engineering continuous to grow more number of women are becoming the part of this...